How “Ghosts In The Nursery” affect bonding and attachment, from an Indigenous view.

In most indigenous cultures ancestors play a very big role. Oftentimes a child is named after an ancestor or a living family member. It’s a sign of respect, of gratitude, of love for that ancestor, or that living person…sometimes the name is passed down because the parents want to honor the ancestor or reconnect with someone living, or because the child looks just like that individual.  Later nicknames might come about because that child acts just like that someone….but what happens when the ghost of the ancestor gets in the way of the parent/child relationship and takes over. Is honoring your ancestors by placing their name and attributes on a child a good thing or a bad. 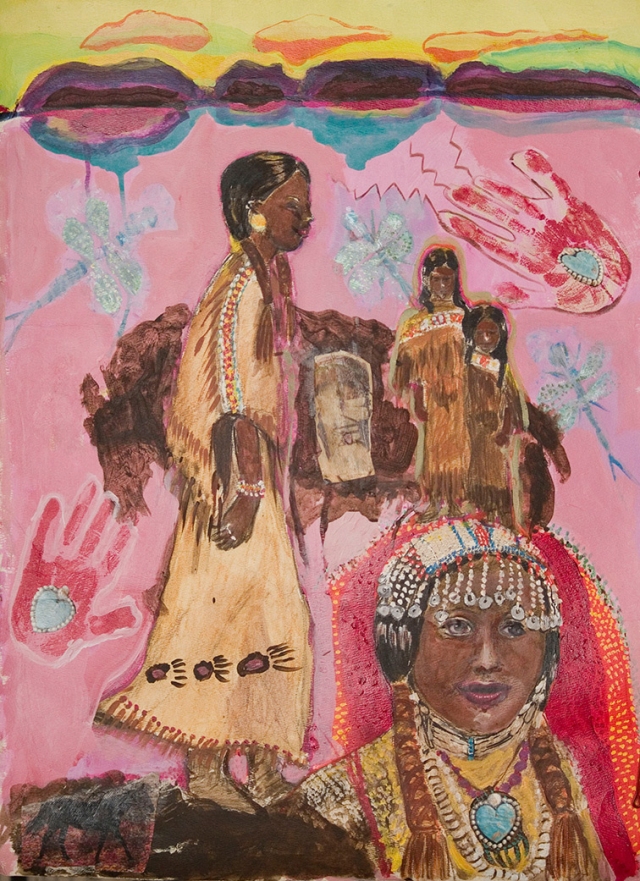 The original concept of Ghosts in the Nursery was first spoken about by a theorist named Selma Fraiberg. In her writings she identifies the ghosts as being thoughts, memories and feelings that the parent might have for relatives and situations, past and present. She also suggests that a ghost can manifest themselves based on vague representations of the parenting that they received during their own childhood. In simple words, parents parent the way they were parented and the ghost is the idea, tradition and connection of a parent to their own childhood. This includes resolved and unresolved issues and relationships.

Often these ghosts visit the nursery after the baby is born, but sometimes the ghosts come to visit during the pregnancy. Most of the time these ghosts remain in the background and do not interfere with the bonding and attachment of parent to child, but instead offer guidance and comfort to the new parents. However in some cases the ghost becomes intrusive and impacts the relationship and bonding of the family with the baby. When this happens the parent transfers their thoughts, feelings and expectations of the ghost, which often times is an unresolved relationship the parent has with that person, onto the child. The baby and the ghost then merge into one. Sometimes you will hear a parent say to a child “you act like your father/mother” or “you look just like your grandmother.” This is a clear indication that in that moment the ghost has entered the relationship and that the focus has now shifted from the child to the ghost. Unless the parent is conscious of this shift, the proceeding interactions will be with the ghost and not the child at all. Children, who are emotional mirrors and whose main thrust is to  please their parents, realize, learn and act out the expected roles of the ghost, thus fulfilling the prophesy that the parent has laid out. This is really hard on the child. The parent does not get to know the child for who they are, but only talks to, and responds to, the ghost who is not real. This leads to malfunctioning relationships between parent and child which results in many missed cues, misunderstandings and miscommunication.

As the child gets older, if parents are not aware of the ghosts in the nursery and have not made peace with them or sent them on their way, new ghosts can developed. One of the main ghosts is called parentification. This happens when a child becomes the ghost of the absent partner or grandparent and is unconsciously expected to give support, guidance and gratification to the parent. Of many sub domains of parentification we will identify two.

The first is the “little husband” and the other is “little wife” or “mother.” We will start with the “little husband.” He is the son of a single mother, who takes on a man’s role in the house. The ghost of the father merges with the child. The child is expected, albeit unconscious, to protect and provide for the mother, to put the mother first and to satisfy the mothers needs. The relationship is sexualized with physical and sexual lines blurred. Mom gives intrusive physical attention such as overbearing hugs and kisses, and might even walk around scantily clad and sleep in the same bed with the child. Although the show of affection rarely leads to sexual abuse, it can leave the son very confused. There has never been a formal study that I know of that links the little husband syndrome and sexual abuse.

However, the son, in all aspects, becomes the husband and is treated accordingly. This poses an issue for the child when the woman enters a stable relationship as it leads to the child to mourn “the breakup” of the relationship between him and his mother. As he does not understand the feelings, he often will rebel and act out lashing out at the mother and her new partner.

The “little wife” or “mother” becomes the head of household, caring for younger siblings, cooking, managing money and doing laundry. She doesn’t have to be in a single headed household, but will become the second or third parent depending on the makeup of the household.  The lines become blurred as she is told to stay in her place as a child, but is given responsibilities that are the equivalent to those of the adults in the home. This causes the girl to feel that she is equal to the parent. And in many respects she is. She becomes the ghost of the mother, grandmother and of the mother herself as she was at the age of the daughter now. Any unresolved or bad feelings the mother may have had at that age are heaped on to the girl and subsequently acted out by her.

But having present and active ghosts in the nursery is not always bad. Donald Winnicott–one of my favorite theorists–said “a baby alone does not exist. A baby can be understood only as a part of a relationship.” And an African proverb says “it takes a village to raise a child.” I take these words to mean those people and situations in the present as well as the past help shape and form a parents bond and attachment to a child. It gives thread to the fabric of who that child will develop into, and what kind of parents will raise that child. Relationships just don’t include those that are living and present, but our ancestors as well. Sometimes you have to understand the ghost to understand that child who is nothing like anyone else in your house. I for one embody the spirit of my great great great grandmother, rumored to be of the Seminole Nation.  It wasn’t until I understood, made sense of, and found peace with her that could I then find peace in myself and for those around me to be able to understand me.  My mother will sometimes laugh and say “oh boy, Jane is speaking through you today.”

Ghosts in indigenous cultures are seen as protectors, guides and bearers of knowledge.  But we, as parents, must never lose sight of the child in the present.  It is very important for parents to be aware of who they are dealing with.  Is it the child? Or is it the ghost from the past or unresolved relationships.  Some questions that you can ask yourself are:

i.     Are or were there any ghosts in the nursery?

iii.     How did the ghost manifest itself?

iv.     Was the child treated differently because of the ghost?

vi.     Do you feel that you were a recipient of a ghost

When you are able to identify and make peace with that entity that comes to visit, or that has taken up residence in the nursery, it will open the door to a stronger bond and a more productive relationship between you and your child.

It was written once, that “humankind has not woven the web of life. We are all one thread within it. Whatever we do to the web, we do for ourselves. All things are bound together. All things connect.”  It is important to understand the past to know the present, to acknowledge the spiritual and how it affects the physical.