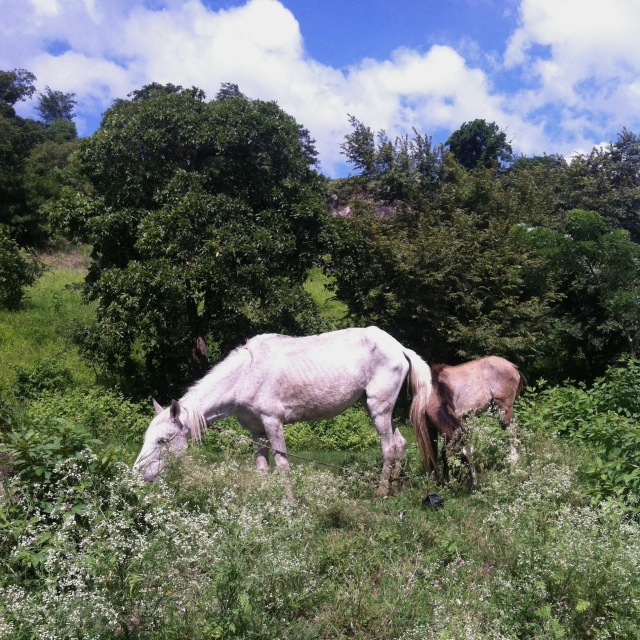 It has been a couple of months since I returned home after spending ten days in Nicaragua doing humanitarian work. I aided in the construction of a church despite the conflictions it had with my own faith, and I helped organize bags filled with substances like coffee, spaghetti and other food necessities for poor families. I ate good food, drank good beer, and now that the trip to Nicaragua has come to an end, I don’t know what to write about.

part-shaman and part-rabbi, whose impact on my spiritual journey can never fully be explained; it was incredibly rewarding to meet another Native American Jew in this world.

I honestly don’t know which topic strikes me as most interesting. I know one thing though; I am not going to go down the “these people are so poor it changed my life” route.

The “poor people” route everybody seems to follow whenever they return home from a third world country. The wonderful soliloquy that the proverbial people go on, ranting and raving about how unfortunate the people were in said country, how “lucky” and “blessed” the people feel to be out of said country and how the people will “never take anything for granted again” as long as they live. To me, those speeches are doing the people of Nicaragua, and of other developing countries a gross injustice.

In Nicaragua, I lived a totally different life then the one I live in New York. And I had a blast. As I would be molting in the hot sun, sweating profusely after only two hours of hard labor, I was amazed at how easily the children carried 25 pound bricks on their backs, and how easily they made a game of it. I saw an earnesty in them, a sweet naïveness,  something I never had as an American child. It was strange to see children playing, not nose-deep in a video-game or an iPad. How sad is that? Being in Nicaragua forced me to greatly question who I was, but not for the cliché reasons I listed before. Being in Nicaragua forced me to assess who I was as a person. An American person.

person. All the clothes I wasted, all the superfluous things I complained about. Everything was put into perspective for me while I was down there. Unfortunately though, all of my self-reflection left me with many unanswered questions.

What is it about the American culture that forces me to pity others, to believe that everything is “done for a reason?” Is that just a way for us to displace blame, to push the responsibilities of our fate to a more abstract entity?

What is it about my cultural development and understanding that kept me blind and severely idealistic about poverty for so many years? Here I was, thrust into a society that my culture views as “beneath” me, that my culture told me was filled with people who were lazy and savage-like; I was supposed to be the one coming in and offering the help; but they were infinitely stronger, tougher, and more mannerly than I could ever hope to be. These people were not lazy or savages; they were strong. So strong. And their strength filled me with shame. Guilt from my past behavior flooded me so intensely, as did anger. As I looked around the impoverished areas, I couldn’t help but notice that at least ninety percent of those living in despair were of Native American/Indigenous descent.

My trip to Nicaragua was a rebirth. I went in to the country as a city brat, with my false sense of intellectual superiority, and came out humbled, proud of my heritage and with more compassion than double my previous life. Being in Nicaragua helped me to see the global struggle that Native peoples are fighting, and opened me up to my responsibility in helping them.

That, and I had a very shitty experience with customs, and a whole new respect for immigrants. But I’ll save that story for another time.